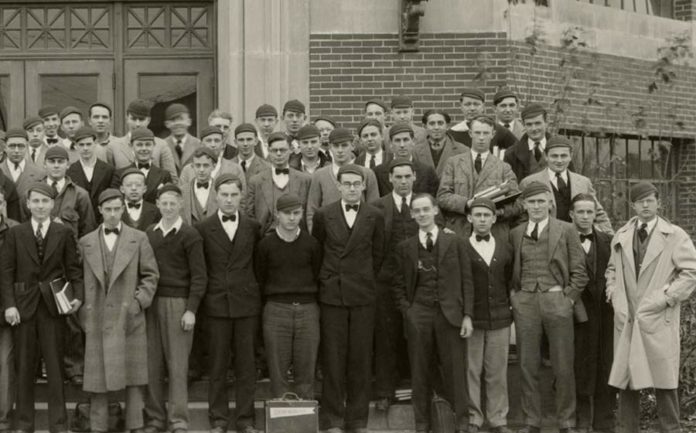 On Oct. 19, 2019, Kettering University, a national leader in STEM (science, technology, engineering and math) education will celebrate 100 years as an educational powerhouse. The University’s partnership and involvement with the community of Flint is a significant part of both its past and present.

What makes Kettering, often referred to as the West Point of industry, so successful and unique is that there is no other higher education institution in the United States that operates the way it does. The University is home to what is arguably the nation’s most integrated cooperative program in a four-year university, operating on a balance of practice and theory. Students attend classes for 12 weeks, and then work in their respective professional fields for 12 weeks. They don’t just observe; they are full participants. As the student progresses in their curriculum, they progress in their co-operative placements and in their responsibilities and roles. It is not uncommon for Kettering students to be in supervisory roles at their co-operative placements by the time they are seniors.

Kettering University has a past steeped in entrepreneurial spirit. The University was founded in 1919 as The Flint School of Automotive Trades in the city of Flint, Mich., one of the wealthiest, most dynamic communities in the United States, the Silicon Valley of its time. People were flooding to Flint at the rate of tens of thousands a year in response to the formation of the automobile industry. The automotive industry was a technological industry with an enormous demand for highly trained talent—which required sourcing. The University was born in response to that demand.

In 1926, General Motors took over financial support of the school and renamed it General Motors Institute. In 1945, a fifth year thesis requirement was added and GMI became a degree-granting college. In 1998, the University, now a private institution, was renamed Kettering University, in honor of one of its founders, Charles F. Kettering, an American inventor, engineer and businessman.

Today, Kettering University is a globally-recognized STEM institution and research center that continues to make significant contributions to disciplines across the board and is home to world-class facilities and nationally-ranked programs. One of the University’s crown jewels, the Kettering Mobility Research Center (MRC), a state-of-the-art proving ground for the next generation of mobility and transportation technology, was completed last year. The MRC is located on Kettering’s campus on the site that was once Chevy in the Hole, and is one of only a handful of its kind in the world. And it is the only facility of its kind in the country to be located on a college campus. The facility doesn’t just deal with cars, it also works with drone technology. According to President McMahan, these innovations have the “potential to radically change life.” Inside the school, where activities are less visible to the public, lies a wealth of technology and cutting edge research. There is a super computer for research, microscopy facilities, and an ISB Research Network Access (of which only a few universities have access).

President McMahan insists that there is no typical Kettering student to fit a particular mold. They are very diverse. When deciding who to accept, they look at the student holistically. What the student has done is as important as his or her aptitude. For example, he or she might be active in robotics, be an amateur gamer, or have a passion for biology. A plethora of famous people are Kettering alumni including: current General Motors CEO Mary Barra and Old Navy President and CEO Sonia Syngal.

Kettering has made enormous and positive impacts in the Flint community, taking on an activist role in the area for more than eight years. The University has been recognized nationally for its community revitalization efforts and activities. Not the least of which has been rebuilding surrounding neighborhoods and the complete restoration of Flint’s historic Atwood Stadium. In 2014, committed to preserving the Atwood legacy and its significance to the city of Flint and its residents, Kettering University assumed ownership of the stadium, and restored the structure to a state-of-the-art sports facility which now includes an NFL-quality playing field surface. The stadium has become the go-to venue for a variety of entertainment, community and sporting events for the community of Flint as well as neighboring communities.

The University encourages people to pursue home ownership in Flint. It also encourages its students to perform community service. The Educare Facility develops teaching toys. There is no other institution like Kettering. “It is a nationally-recognized jewel,” said Dr. McMahan.

The Wall Street Journal named Kettering as a top school for preparing students for their careers. Its unique and powerful educational model forms and develops talent.

As we celebrate its centennial, we must not only look at its past and present, but must also ponder its future. President McMahan is exceedingly proud, but not at all surprised to see the University take its place front and center on the world stage. It is no doubt that Kettering will continue to positively impact the community it serves.

The Magic Pills of Physical Wellness

Advantaged Yet Disabled: Being Bipolar in the Healthcare System

Flint Fashion Week a Success that has a Cause Lookin’ Good