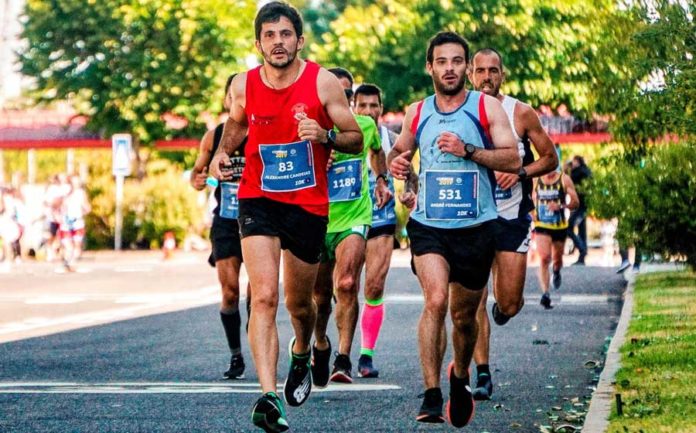 Keep A Running Tally Of All Things Healthy

WE RUN THIS TOWN

What began in Mark Bauman’s Flint apartment in 1974 is now the premier running store in the region. In those early days, he kept running merchandise in his living room, selling to runners on race days. Forty-three years later some of those initial customers are still coming to the store.

A former Ainsworth High School cross-country and track star, and later a high school teacher, Mark Bauman has turned his life’s passion of running into a thriving business.

Bauman’s Running and Walking Shop’s slogan (and website address) is: “We Run This Town.” Is he into politics? No, physical running is the key!

Mark Bauman is a runner. He has competed in every Detroit Marathon since it began in 1978. He ran his first Boston Marathon in 1970 and hasn’t missed running it since then. His fastest time in Boston was 2:30:32 in 1975. This year was his 49th Boston Marathon. He competed in the Boston Marathon in 2013, during the terrorist bombing, but was unharmed. His son and grandson were with him as spectators.

He also is a yearly contender for the Crim. Mark still runs and walks about 40 miles a week. This man is known as the “Running Man” to many in the area.

Bauman has seen the sport of running change a great deal since he first opened his business in 1974. Men were his primary customers at that time, but now more than 60 per cent of his customer base are women. The styles of shoes and clothing for both men and women have evolved over the years. Bauman’s Running and Walking Store has the latest in sports apparel, and is the go-to place in Flint for all sports equipment, not just for running and walking. It also has an Amazon storefront, committed to providing all their customers with the highest standard of customer service, no matter where they shop. Running is a national sport…many people like to run alone and experience the quiet time. Others love to get into the race for the competition.

Bauman grew up in the Flint area and is very involved in sponsoring major fundraisers and runs. He was the originator of the 5K Santa Run where every runner gets a Santa Suit with their entry fee!

All ages and levels of runners and walkers are given professional attention at Bauman’s Running and Walking Store. The shop carries brand names of shoes and apparel, and sponsors shoe clinics for customers to get the best fit. A runner’s shoe is fitted to each person’s foot, and numerous options for shoes are offered. Bauman states, “There is no right or wrong brand of shoe. It just depends on the runners and their running style.” Mark prides himself with the ability to provide not just running and walking shoes, but all kinds of equipment needed by the athlete. Runners’ sunglasses, watches, knee braces, orthotics, and a full stock of nutrition products are available at Bauman’s.

Mark has ten grandchildren, between the ages of two and 23 years. His oldest grandson, Brenden Stafford, has joined him in the family business and assists him in offering personalized service to the community while attending college.

Bauman’s supports runners and walkers in the Flint area with many clinics on health and fitness. A local celebrity himself, at  age 68 Mark brings fitness and strength training experts to the shop to help runners stay healthy and encourage those just beginning to run. He and his wife Joan, also a runner, enjoy sharing the opportunity of organizing local sponsored events. They also enjoy biking and yoga, in addition to their running and walking.

Bauman’s Runner’s and Walking Shop has 10 qualified employees who will spend time with customers to ensure complete satisfaction during and after purchases. With many years in the community – and as the first running shop of its kind in the Flint area – Bauman’s was very unique at the time of its opening. Since then, the shop has grown into its current home on West Hill Road, between I-475 and US 23.

Bauman feels the best thing about having a business in this area is the people and the many relationships he has built over the past 40 years, and the ability to help others find delight in the sport of running.

A recent visitor – in fact, a retired nurse, who should know what she is talking about – said, “Running and walking are good for everyone. They get the mind off daily troubles, keep the stress level down, and improve sleep. Running also impacts the cardiovascular system, which will help lower blood pressure and cholesterol. What many runners and walkers love about this exercise regime is the discipline it brings into all areas of life!”

Running is discipline…it’s doing what needs to be done, even if you don’t feel like putting on the new running or walking shoes, at least at first. Running is cheaper than therapy, so decide to visit Bauman’s Running and Walking Shop… and run this town!

Cancer is a Word–Not a Sentence

Kick-Start a Healthy School Year with These Helpful Tips