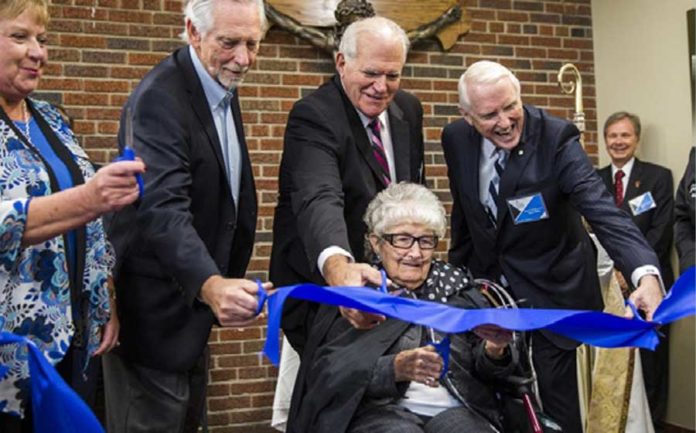 Robert Sibilsky first encountered Catholic Charities in 2001 when a young lady came to his office and asked him if he was willing to join the fundraising efforts for the refurbishment of the Sheridan Center, now the main administrative building at Catholic Charities in Flint. A Flint resident his entire life, he knew where the community had been and what it had gone through. He was very passionate about doing what he could to be a part of the regeneration of the city. He appreciated the work of Catholic Charities from afar but this project gave him an opportunity to develop a personal relationship with the agency.

Since the agency opened its doors in 1941, Catholic Charities has always looked for new opportunities to better serve the community. By the start of the 21st century, the Sheridan Center needed renovations to make office space for counseling, substance use treatment, prevention/education and support groups, as well as foster care visitation rooms. During this first encounter with the agency, Sibilsky became more impassioned with the mission of the agency and the people he met who left a huge impression on him. He knew his journey with Catholic Charities had just begun.

When asked why he gives back so passionately, Sibilsky says, “It’s not hard to say why I am involved in Catholic Charites. During most of my working days, I was involved in some type of nonprofit work to assist those in need. I planned that when I retired, I would approach Catholic Charites to see if I could be of assistance. One of my favorite quotes from Luke 12:48 states: ‘To those whom much has been given, much is expected.’ I believe this whole-heartedly.

Growing up, I was influenced by my parents, grandparents, and numerous mentors. My Catholic school education and environment also played a large part in my desire to give back. My training in scouting, experience in the Leadership Flint program and my current membership in the Flint Rotary Club all had a bearing on why I believe in giving back to the underserved in our community. I am proud to say that I take my mission to give back very seriously and it drives my every action. “

In 2012, Sibilsky was invited to join the Board at Catholic Charities which had recently acquired the old St. Michael’s Catholic School. President and CEO Vicky Schultz was in the process of figuring out how to make her dream a reality by creating a Center that would become a comprehensive solution to homelessness. Sibilsky smiles as he recollects, “At my first meeting they announced the acquisition of St. Michael’s School. Dr. Gary Lipe the Board Chair at the time asked, ‘Has anyone been involved in any fundraising?’ I raised my hand and before I could blink, I was the Capital Campaign Chair for the Center for Hope. I had no idea what I was getting myself into, but I was up for the challenge.”

If Sibilsky was looking for a challenge, he was not disappointed. When the Center for Restoring Hope Capital Campaign began, he started the arduous task of researching the other campaigns that were ongoing within the region. What he found was daunting. Flint’s economy had been bleak for decades and the nation was still recovering from the 2008 recession. Now the community was collectively trying to raise between $50-60 million to fund various projects throughout Genesee County. “The only thing we could do was put blinders on. We couldn’t worry about what everyone else was doing, we just had to worry about what we were doing and we had to go out and make it happen. So we did,” said Sibilsky.

Sibilsky admits that there might have been a higher power helping out during the campaign. “We started every meeting with a prayer that the Holy Spirit would help make the campaign successful and give us the strength to continue.” The committee also started collecting prayer requests from clients. The members would read them at the start of each meeting. “If we felt discouraged and needed to remember what we were doing it all for, those prayer requests were mind blowing. The people of this city need our help, people have lost jobs, some lost everything they had, through no fault of their own. If my commitment to the campaign ever wavered, it was rekindled every time we read those prayers.”

Vicky Schultz, President/CEO tells everyone: “Bob made it happen. His mantra throughout the campaign was compassion, collaboration and community. It was extremely important to him that everything they did during the campaign start from a place of compassion, while working together to build a stronger community.” To that end Sibilsky brought in 60-70 community leaders during the campaign to share with them the vision of Catholic Charities and gather their feedback regarding the project.

It took much longer than expected, but eventually the campaign raised the $6.2 million required to make the Center for Hope a reality. Sibilsky applauds everyone who is working to turn the city of Flint around. “I remember Flint in it’s heyday. As an alumnus of St. Matthew’s Catholic School, I still get chills when I walk into the Community Closet (the old gymnasium of St. Michael’s) remembering the basketball games I played here. Flint is a huge part of my heart and my history. This was an opportunity for me to be involved with a project that was doing something positive for the city. In the process of doing that, we are helping a lot of people.”

Sibilsky explains that Catholic Charities is trying to create the crown jewel on the north end of Flint. “I do not accept that Fifth Avenue is the demarcation line of Flint and anything north should be abandoned, and I don’t think anyone else should be willing to accept that either. Just look at what is happening north of here with Smith Village, all positive movements in the right direction and we want to be a part of it.”

Now that Catholic Charities has the facility it needs to be a comprehensive solution to homelessness and the capacity to meet the needs of the community, they intend to continue to listen to their clients’ prayers and expand services where they see a need. They have also turned their attention to the immediate surroundings. “We want people to feel positive and proud of the north end of Flint. Our next step in creating the Catholic Charities campus is to work with the community to clear some of the derelict houses adjacent to us and perhaps put in some green spaces for people to enjoy,” says Sibilsky.

Changing Lives for Amputees, One Socket at a Time

Gen X-ers and Millennials: Can’t We All Just Get Along?