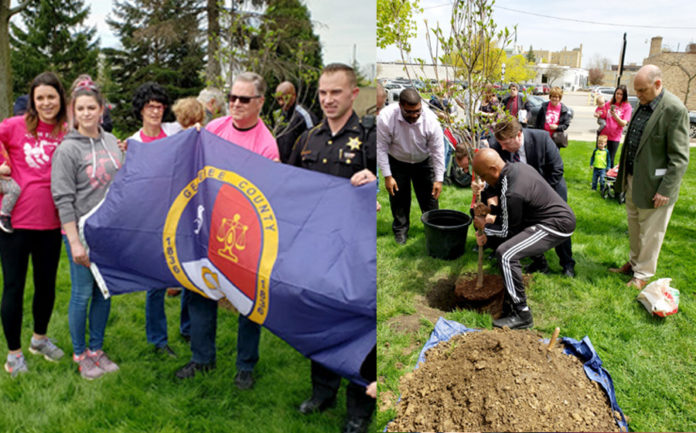 A generation ago, the transplantation of organs was an experimental science. A generation before that, occasionally publicized efforts in the field, such as the work of aviation pioneer Charles Lindbergh and Nobel-Prize winning scientist Dr Alexis Carrel on the “profusion pump” – a virtual external heart to be used during operations – often were dismissed. And throughout human history, the sharing or transplantation of organs, much less the manufacture of artificial organs, were the stuff of fantasy.

This writer’s wife was the recipient of a “new” heart and kidney, gifting her with 16 additional years of life. And John Gleason, the Genesee County Clerk and Register of Deeds, is a kidney recipient also. As with many transplant recipients, it not only saved his life, but turned it around. He has become active as an advocate for Organ Donation; as the founder and president of the Gleason Community Fund (see article on the Fund’s student essay contest elsewhere in this issue); and investing in public awareness at every opportunity.

The latest opportunity was the planting a tree on the grounds of the Genesee County Circuit Courthouse in Flint recently – an effective symbol of choosing life… the blessings of planting and transplanting… and a permanent representation dubbed the Tree of Life.

Gleason was appropriate host of the tree-planting ceremony, and the small group of interested parties included other recipients, families of donors and recipients, and local officials and first-responders.

Shalonda Griffin, of Michigan Gift of Life, was in attendance, and spoke of the importance of driver’s license Donor notifications, and other elements of public awareness. Pastor Kevin Thompson opened the ceremony with a prayer.

Amy Dutil-Walls was a featured speaker at the largely informal gathering. Born in Flint but now living in Ireland, she returned to Michigan during Donor Awareness month. She is a graduate of Flint Central High School and Michigan State University. At the ceremony with her husband was their two-yearold son Mannix. At the event, she shared the emotional story of her daughter’s death two years ago in an automobile accident.

She spoke lovingly of the vibrant personality and flowering talents of four-year-old Eslin Luna. Her husband Vinnie was driving Eslin to day care when a truck out of control caused him to swerve into oncoming traffic. Little Eslin’s neck was snapped and she died after life-support attempts. Vinnie himself was in a coma for several weeks.

During the doctors’ rescue attempts over Eslin – who actually was nine days short of her fourth birthday – Amy was asked if, in the “worst-case scenario,” she would agree to having Eslin’s organs donated. She said she answered “Yes” immediately; and eventually many people were benefited in life-saving ways from that decision. Her little kidneys helped a 60-year-old man on dialysis; her lungs were transplanted into a toddler with cystic fibrosis.

At the tree planting, Amy and her family wore T-shirts bearing the legend “Team Eslin.” Amy called Eslin “my little superhero,” and she urged everyone to “show your real heart by the heart-symbol sticker on your driver’s licenses,” indicating willingness to share organs.

John Gleason urged the approximately 40-strong crowd to sign up, pro-actively, with the Gift of Life registry. He offered the reason why a dogwood was chosen as the transplanted young tree.

“There is a legend that the cross of Jesus was made from a dogwood tree”. “Certain varieties never grow tall enough, the legend states, to nail someone on its wood. Therefore it has been regarded through the centuries as a life-affirming tree.” On site there was a floral display in the arrangement of a cross.

John Gleason is proud of the efforts of donation advocates. “When I was a state representative, Michigan had approximately 600,000 names on the donation registry list, one of the worst in the country. Now we have about 5-million names. More than 60 per cent of drivers are now donors, but more progress is needed!”.

In 2003, Gleason sponsored House Bill 4479, signed by then-Gov. Jennifer Granholm, which prohibits family members from revoking the decision of an organ donor, age 18 or older, after death. In 2005, he sponsored two bills that required Secretary of State staff to provide information about becoming a donor to all license applicants and created the heart insignia now placed on the driver’s licenses of organ donors.

Quoting an oft-seen bumper strip, Gleason advises, “Don’t take your organs with you to heaven. Heaven knows we need them here.”.

Initiatives in the Fight Against TBI and Other Disabilities

The Cork On Saginaw

Bouncing Back: How to Be Resilient During Tough Times

Where the Wild Things Live and Roam