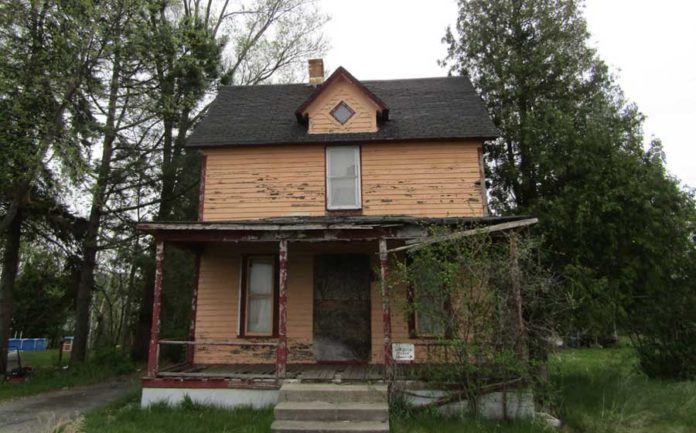 A financial white elephant and community eyesore is being restored and redeemed by Habitat for Humanity Lapeer-Tuscola into a halfway house for veterans needing housing and stability as they start new lives.

Escape from everyday life…get back to nature… gaze at the stars… ahhhhh… sleeping outdoors is a thing.

Americans spend $120 billion a year on outdoor recreation products, according to the Outdoor Industry Association.

Are there homeless vets? Where’s the outrage? Seriously, there are forgotten soldiers left to fend for themselves? Is anyone doing anything about this?

Someone IS doing something… right in our midst. Habitat for Humanity Lapeer-Tuscola is intensely concerned about our homeless vets. So is the city of Vassar, Project Brotherhood Resolve, Home Depot, General Motors Care Group, and Local 598 Veterans Committee.

Returning veterans lose a lot when they re-enter civilian life… community, structure, resources, jobs, supervision and, often, a sense of direction. If they entered the military when they were 18-19 years old, they’ve never had to “do life” on their own. They joined an organization that is systematized and supportive in a macro way. It is a brotherhood and sisterhood that prides itself on watching out for each other. Rejoining mainstream, civilian life can be brutal.

Looking for a job is the first thing on the returning veteran’s list for obvious reasons; they need money to pay for a place to live and sleep and eat. Assuming that you came back with a psyche that’s healthy enough to be able to jump back into “regular” life, what will you find? The same job market everyone else is struggling to navigate.

A unique hurdle to clear…veterans’ skills and qualifications are often perceived as military-related and it can take a hiring manager an extra step to see their value as transferable to civilian needs. Veterans often feel out-of-the-loop and, consequently, at a disadvantage when job searching. No job, no money…homelessness. Where to live? Habitat for Humanity has an idea and it’s a good one. It’s called Veterans Build.

Launched in 2013, Veterans Build is a concentrated and purposeful effort to address the housing needs of returning veterans. It is structured to empower veterans in their goal of achieving strength, stability and self reliance. Habitat for Humanity Lapeer- Tuscola is on it!

Executive Director Carolyn Nestor can hardly contain the excitement she feels about this particular program. The focus of the effort is straightforward. The No. 1 priority is to build safe, affordable housing. In some cases, instead of building homes from the ground up, existing homes are chosen for repair, maintenance and preservation with a goal of making them energy-efficient and affordable. Home Depot has committed to partnering with Habitat for Humanity. Together they have developed a Repair Corps program to offer Critical Home Repairs.

Second, Habitat for Humanity assists with veterans’ employment situations by capitalizing on skills sets learned during their time in the military. Veterans are recruited for positions as employees, board members, extended volunteers, National Service members, interns or fellows. Involvement as volunteers helps with re-entry into civilian life by forming relationships while collaborating with neighbors.

Habitat for Humanity is making its Veterans Build program an organization-wide effort by educating and sensitizing its own employees to think like veterans, understand the culture they come from, and effectively interact. Financial and literacy programs are offered to increase veterans’ success as homeowners.

Habit for Humanity Lapeer-Tuscola is one of Michigan’s local chapters. It has enthusiastically leapt on board and is busy making a difference in veterans’ lives. One case in point is what’s happening on Lynn Street in Vassar, Mich.

The city of Vassar donated a vacant house located at 128 Lynn St. and is partnering with Habitat for Humanity Lapeer-Tuscola, Project Brotherhood Resolve, General Motors Cares Group, and Local 598 Veterans Committee to turn an old house into a wonderful home for returning veterans.

Project Brotherhood Resolve’s sole mandate is to battle veterans’ suicides and homelessness. They have a vision, a goal of creating a Veterans Village for returning vets. They see this house as the first home of many that will bring their Veterans’ Village to life. It will house eight veterans, but will offer much more than just shelter.

“They need some place to turn to. They’ve had no resources or anything in the past, or a lot of them are afraid to ask and we need to get those resources out to them. We’re hoping it looks like some place you’d want to come home to and to give them a home,” said Gary Overzet, of WNEM.

Nestor said the work on the Lynn Street house will be completed next year. The evolution of Veterans Village will take several more, she added.

Homeless vets in Lapeer and Tuscola counties will be able to ditch their tents instead of pitching them. Work is underway. A place to work and thrive is being prepared.

Be encouraged. Veterans, you have not been forgotten.

An Interview with Publisher Tel K. Ganesan: Teaching Flint How To Fish Again