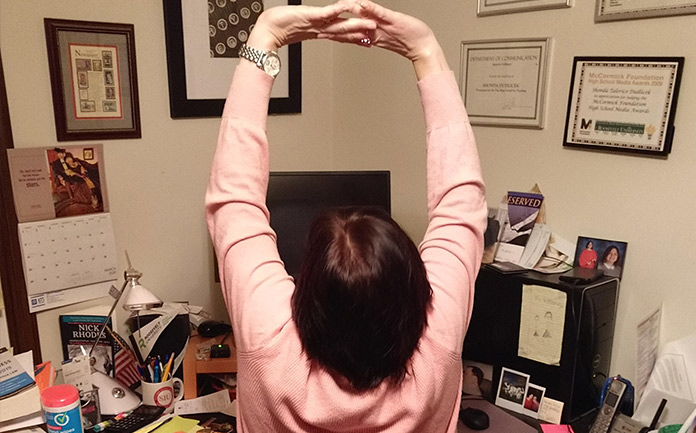 Many of our jobs involve hours of sitting, slumped in front of a computer screen, or standing on our feet all day. We’re not doing much physical activity, but we’re still exhausted and sore.

Why? And what can we do to combat this when so much of our time is spent in one position or the other?

Dr. Eric Brosio, a chiropractic physician at Health First Wellness Center in Schaumburg, Ill., says by taking note of what we’re doing, we can counterbalance that with opposite movements.

“When you’re looking at a full day of sitting or standing, you’re putting yourself in an extreme length of time to do damage to your body,” Brosio says. “When you get set into one position, your body tires.”

This explains why our necks or backs may ache when we’re not really doing anything, but remaining in the same position. When we’re at a desk, we begin to slump and our shoulders roll forward. Next time you’re working at your desk, look down. Even if you’re not at a desk, if you’re standing behind a desk, interacting with the public, you’re slumping or leaning forward. The majority of our movements put us in a forward flexion, or forward bending, position.

“Look at yourself when you’re sitting in a chair,” Brosio says. “Your hips are bent at a 90-degree angle.”

If you’re on your feet as a cashier or receptionist, you’re still in that forward flexion position. “When you’re engaging, you lean forward. You’re still standing but you’re bent over. You’re doing an exchange of cash, or a constantly repetitive motion of reaching down. You’ll tighten in the front,” Brosio says, gesturing to his chest.

Being on our phones also contributes to this, he says, because we’re often holding the phone in one hand and looking down at it. “The biggest buzzword is ‘text neck,’ a new term for what already existed because everyone is on their phones.”

That’s called anterior head carriage, and it occurs when the head is improperly aligned with the neck and shoulders so the head leans forward at an unnatural angle.

“It’s amazing how many kids today have this from being on their tablets and phones,” Brosio says. “When I was a kid, you’d get it from video games. That posture can be a cause of difficulty. And there is a real prevalence of it today.”

With repetition over time, the muscles in the front of the body shorten. “This can create change in the body and we become tight,” Brosio says.

So we need to compensate with balance and opposing movements. “We can’t just quit our jobs, but we can take measures to offset what we do to ourselves every day to counteract the effects of it,” Brosio says.

Exercise and stretching can help. “Simple things, not building muscle strength, but supporting it with the body,” he says.

If we don’t get that balance, then those repetitive movements as we get older can lead to larger problems over time, such as neck and back problems like degeneration of the spine, disk bulges and disk herniation.

“Some are irreversible and then it’s just pain management,” Brosio says.

Sleep, a healthy diet and exercise, including 30 minutes of cardio daily, can help provide some of that balance.

“And if you’re at work at a desk job, take regular breaks…something that gets you up and off your chair,” he says.

Drinking water to stay hydrated is important, and we should have a water bottle at our desks. But, Brosio suggests not filling the largest bottle, but using a smaller bottle that requires you to get up and refill it more often.

Use your cell phone or smart watch to set a timer for every 30 or 60 minutes to take a five-minute break. And once you’re standing and moving around, stretch the body a little bit, he says. YouTube offers lots of videos with guidance on how to stretch the neck and lower back.

“Pain and discomfort in the body is telling you something is wrong,” Brosio says. “Pain of any sort in the body can lead to loss of function or pain or both. Using your car as an analogy, like your check engine light. At some point, it will break down.”

As a chiropractor, Brosio is always in forward flexion, working on patients. He starts his day with a couple of exercises, then stretches midday, followed by more exercises at night.

It’s important to stretch the back and always work in abdominal activation. “You strengthen the core so the back muscles aren’t the main stabilizer,” Brosio says. “When you’re sitting in a chair, focus on abdominal breathing and ab contractions. Imagine pulling your bellybutton into your spine.”

Most important? Brosio says, “Listen to your body; that’s the biggest thing.”

10 Tips to Overcome Your Fear of the Gym

The Cork On Saginaw

Healing on a Deeper Level: Holistic Options for Recovery