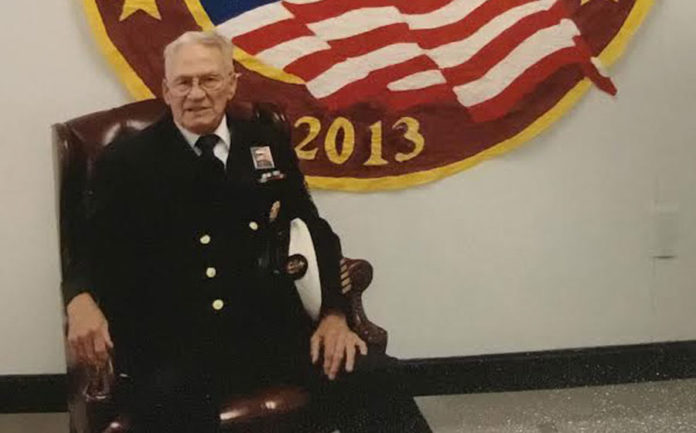 This is the story of a guy who served in the us navy for 23 years. If you google him nothing shows up.

But among his achievements and memories are these —
He once was flown home on air force one… surreptitiously… in the dark.
President john f kennedy shook his hand and thanked him… twice.
He was nominated for and awarded the joint services commendation medal
He was the last sailor to retire off the uss intrepid.
He was nominated and chosen for a freedom honor flight, sept. 12, 2018.

Get ready to be impressed by the story of one of america’s uncountable hero vets – those who often worked, and remain, in anonymity… but whose service is as red, white, and blue-strong as the flag they defended; as modest as any of your neighbors. In fact, some of them might be your nerighbors.

The year was 1952 and howard “popeye” hitsman was eager to enlist. His brothers had already been drafted. Per the “sole-survivor policy” (think saving private ryan), and as the youngest of three sons, he was not allowed to join the regular navy until one of his brothers retired. He instead enlisted with the stateside navy reserves and was assigned the role of diesel engineman.

In 1955, he joined the regular navy and as a navy airman was assigned to fighter squadron 62 at cecil field in jacksonville, florida. His job was maintaining jet planes. He was soon promoted in rank to seaman and transferred to the air task group 202 which was responsible for the training of pilots for carrier landings.

His goal of serving in the military was a reality, but little did he know what was ahead for him.

Howard will tell you that his rise in rank was directly correlated to his willingness to learn. An intelligent man who, to this day, seeks to be informed and share his knowledge, it was his enthusiasm to take on new roles that set him apart in the eyes of his superiors. He served on five ships – two cruisers (uss n. Hampton, uss wright); two aircraft carriers (uss randolph, uss intrepid); and one radar picket ship.

In 1960 he was assigned to a j.a.c.e. team (joint alternate command element), deploying regularly to a relocation ship at sea. It was where the president of the united states and the joint chiefs of staff would go in case of national emergency.

The team moved every 30 days, rotating between the pentagon in washington, d.c.; the “underground pentagon” at fort ritchie in cascade, maryland; and deployment on the uss north hampton (cc1 – communications cruiser) to parts unknown. Their deployment aboard the ship was classified. Howard and his team operated out of a secure vault within the hub of the ship where war plans and communications were covertly managed.

While serving on battle staff team 1 howard was nominated for a joint services commendation award, which he ultimately was awarded.

It was at the conclusion of the cuban missile crisis that president kennedy, himself a decorated navy veteran, went aboard to congratulate the fleet for their valuable service; and later, a ceremony was held onboard the uss hampton to officially thank the j.a.c.e. team. President kennedy and the joint chiefs of staff personally expressed their appreciation.

No grass grew under howard’s feet, an aphorism that is apt even for a sailor. Now a 2nd class petty officer, he was assigned to the radar picket ship uss outpost until he was promoted to 1st class petty officer and assigned to the staff of the Commander-in-Chief of the Atlantic Fleet (CINCLANT) stationed in Norfolk, VA, after which he returned to the Joint Chiefs of Staff . In Norfolk he served as a member of the Battle Staff Team 1 NECPA (National Emergency Command Post Afloat) attached to the Armed Forces Staff College. His team was deployed on USS Wright CC2 to South America where it provided hospital and communication support for President Johnson and the Joint Chiefs of Staff during the Uruguay Conference. The team returned home ahead of the ship, flown back under cover of darkness aboard Air Force One.

“howard will tell you that his rise in rank was directly correlated to his willingness to learn.”

Howard was transferred to Patrol Squadron 30 (VP30) and promoted to Chief Petty Officer. His final assignment was on the USS Intrepid, where he served as the captain’s yeoman in charge of the captain’s office. He was the last sailor to retire off the ship. He helped with the process of closing down the ship to the very last detail.

The USS Intrepid, of course, is afloat today, the iconic Sea, Air, and Space Museum docked in the Hudson River, visited by millions of New York City tourists.

What a career Hitsman had! When asked what was the favorite aspect of his time in the military, he quickly answered, “The people! They were like family.”

Hitsman recently underwent an aortic valve replacement. His cardiac surgeon, Dr John C Gurley of the University of Kentucky Albert B. Chandler Hospital was the son of a WWII Navy man. The bonding continued as they shared stories; the the surgeon commented that Howard was still a man of achievement. He congratulated him on being the first Freedom Honor Flight veteran to receive the new state-of-the-art heart valve replacement. Howard is now wheelchair-free, prepped for his visit and flight, September 12, 2018. (The Freedom Flight organization’s goal is to fly our veterans on one-day, all-expense paid trips to Washington D.C. to visit the memorials that stand in their honor.)

Howard Hitsman, like many military men, had a family who loved and supported him through the many deployments and moves. His wife, three sons, daughter, and extended family always appreciated his devotion to the country and still call him their “hero.”

He would be within his rights to act proudly about what he accomplished in his lifetime but, instead, he is humble and engaging… a genuinely good guy.

Bouncing Back: How to Be Resilient During Tough Times

Interview with Firefighter Rico Phillips—Part 1: Heroes are Human, Carrying a Lot Beneath...