Historical: Medicinal usage dates back to antiquity where such notables as Hippocrates, Galen, and Asclepius made written reference to it. This herb has been believed by Anglo-Saxons as one of the nine sacred herbs given to humans by the lord. (Crevin) The word chamomile comes from a Greek word meaning “earth apple” and is one of the most popular herbs throughout the western world; a whopping one million cups of tea are ingested each day.

An important remedy to the Eclectics, it was often employed in young children but also widely used to help with nervous irritable conditions and irritable gastrointestinal conditions.

Dr. Harvey Wickes Felter, an eclectic medicine doctor and author, in his book “King’s American Dispensatory, states, “It is peculiarly adapted to the nervous manifestations of dentition, and in other affections where there seems to be a morbid susceptibility to pain,” which clues us into chamomile’s ability to assist with both nerve pain and neuroses.

Chamomile was widely used to flavor beer long before hops was common-place and is making a comeback in the world of craft beer brewing. Try your hand at making your own with the recipe given in dosage/applications.

In his book “Culpeper’s Complete Herbal,” Nicholas Culpepper provided a long list of complaints for which chamomile is “profitable,” from agues and sprains to jaundice and dropsy, explaining that the flowers boiled in Lye are good to wash the head and bathing with a decoction of chamomile removes weariness and eases pain to whatever part of the body it is employed.

In her 1911 publication “The Herb Garden,” herbalist France’s A. Bardswell called chamomile “the plant’s physician,” describing the healing effects chamomiles have on their companion plants. As a companion plant, chamomile can prevent many fungal and bacterial infections in the plants around them as well as repelling many insect pests. Chamomile is known to improve the health and vitality in their plant companions. It could be assumed that a chamomile based compost tea would also be helpful in aiding sickly plants in the garden based on Bardswell’s claims.

Chamomile has inspired artists through the ages with its simple beauty and commonplace in the garden and in the home.

Chamomile has a long history of use by herbalists for anxiety, fear, agitation, and nervousness. In homeopathy, it is used especially with babies and children for teething pain, colic, growing pains, temper tantrums, earaches, and a range of complaints when a person is irritable or angry and does not want to be consoled.

Studies: In 2017, a double-blind controlled 10-month trial study was completed on the potential effectiveness of chamomile to reduce the severity of cyclic mastalgia (breast pain). The groups consisted of premenopausal women who were over 18 years old who experienced cyclical mastalgia with a pain score of 3 on the visual analogue scale (VAS). Other criteria for the study included: no consuming chamomile in the last four weeks, no regular intake of aspirin, non-steroidal anti-inflammatory drugs, Danazol, Bromocriptine, or Tamoxifen in the past three months, no history of cancer, no serious medical illness and no allergy to chamomile products. Also, the participants who were over 40 years old needed to have a normal mammogram and targeted ultrasound of the focal pain area during the current year. Subjects were assessed each week and had to track daily breast pain. The studied dosage was 5 drops of the standardized extract (or placebo) 3 times per day. The findings, which were published in 2018, were impressive. While both groups experienced a reduction in pain, the group taking the chamomile experienced a significant reduction in mastalgia; scores dropped on average 14.5 points in just two months. The researchers concluded that chamomile is a safe, well-tolerated and effective treatment for people dealing with mild to moderate cyclical mastalgia.

There have been several studies on the efficacy of chamomile to help with sleep troubles. One study published in recent years aimed at the elderly population of a nursing home in Iran due to the increased presence of insomnia and sleep disturbances among that age group. This well-focused study is timely and necessary, as hypnotic agents are being increasingly prescribed to the elderly to help manage sleep disturbances and insomnia. This study points out that there is evidence to suggest that anxiolytic agents and barbiturates increase insomnia among elderly people by 50% and moreover, long-term use of some hypnotic agents may result in dependence and tolerance so that their discontinuation can cause the symptoms of withdrawal syndrome which are in turn more severe than the symptoms of sleep disturbances. The study utilized chamomile capsules 200 mg (from a chamomile soxhlet extract) 2x per day for 28 days in one group and wheat capsules 200 mg 2x per day for 28 days. What researchers found was that while both groups started out in relatively the same place with regard to their sleep disturbances, the treatment group saw significant improvement with quality and quantity of sleep as well as with how they felt during the day (less depression and anxiety). The study concludes that chamomile can be an effective sleep aid to address sleep quality in the elderly.

Dosage and Method of Delivery:

Chamomile dosages can vary widely from large quantities of tea drank throughout the day to small fractions in homeopathic pastilles. According to Felter, a strong infusion taken in larger quantities internally or applied topically is best for chamomile’s gross action as opposed to drops of the tincture or teaspoons of the infusion for more specific purposes. Capsules are another way to ingest larger quantities of the dried flowers and can easily be made at home or purchased from a reliable source.

Homeopathic Chamomilla: For acute and self-limiting complaints, take one pill or five drops of the remedy every 15 minutes to 4 hours. Refer to chart for other homeopathic dosing guidelines. (http://www.homeopathy4health.ie/2l3homeopathicsposology.htm)

Hydrosol: Can be used undiluted as an eyewash and compress for conjunctivitis

Infused oil: 1oz. of dried flowers to 10 oz. of oil used as base oil for salves, balms, and lotions applied topically as needed.

Essential oil: Compress with warm water and 5-10 drops of oil soaked into a soft cloth and applied to wounds, rashes, sore muscles and joints.

Hair rinse: Boil 1oz. of dried flowers in 1 pint of water for 15 minutes. Cool and strain through a coffee filter and use as a final rinse for freshly washed hair.

Cautions and Contraindications: Individuals with known hypersensitivity to members of the Asteraceae family should avoid use of chamomile to reduce the likelihood of an allergic reaction. People in the first trimester of pregnancy are cautioned to avoid chamomile because of its teratogenic effects.

High doses/strong infusions of this herb can cause emesis. 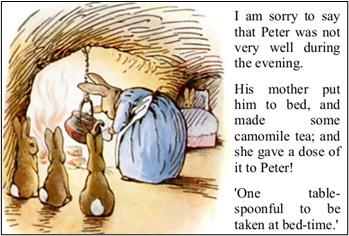 Personal Observations: Chamomile and I are fairly well acquainted at this point on the path but I began using chamomile in homeopathic form before knowingly using it in plant form. As a career nanny (10 or so families, dozens of children, and 25 years of experience), I have found both the homeopathic chamomile as well as the plant itself to be indispensable to help with tummy upsets, nerves, colds,     fussiness, teething, and excessive energy (at night) in children of all ages from infants to teens. One night, several years ago now, as I was putting a couple of little ones to bed, I was reading Peter Rabbit by Beatrix Potter. I’ll never forget coming to the page pictured here, reading it aloud and the eldest (and most excitable) of the children saying, “Oh! I don’t feel well; can you make some chamomile tea for me like Peter’s mama?” I happily obliged and each of us took a tablespoon before bed and it seemed to work like magic, for the ill child now felt well and fell asleep soundly before too long.

For myself, in the past year of feverish studying and outdoor explorations, I can say absolutely that my health would have suffered greatly without the almost daily chamomile dosing in either a strong nightly infusion, a few drops of the soxhlet, a cup or four of a chamomile containing gut-healing tea blend in the nerve capsules that I made, or the essential oil put into a bug-bite salve. If it weren’t for the concern for potential allergic reaction, I believe chamomile could benefit everyone because of its versatility and overall ability to soothe. 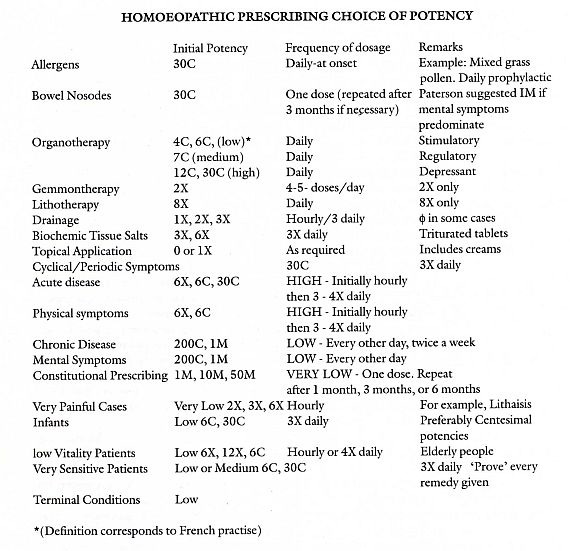 A Professional Resume Coach Shares the Secrets of Landing that Job

Soul Oasis Where You Can Wake Up Your Mind Body & Soul